Active 2 days, 15 hours ago
Just dropping by to say Hello and that I am getting back into the part 15 arena to take another shot at broadcasting after a long 2 1/2 year break. Hope all is well with everyone. Happy Broadcasting View

I posted this on the ALPB and sharing it here as well.

We have some pretty nasty weather happening right now in Eastern Kentucky.

Several storms have already moved through the region and there are more to follow, thunderstorm watch until 10 pm ET and flash flood watches until 2 a.m. ET Tuesday morning. The creeks were already on the rise from storms we had the past couple of days and it’s looking like we may have another flooding situation like we had a year ago.

Currently Blue Bucket Radio is airing NOAA Weather Radio from 162.475 Mhz using the satellite feature in Zararadio with station i.d. , temperature, humidity and time  updates firing at the top of the hour. All other programming is suspended until further notice or in the event we lose power.

Power outages are common around here in the event of severe storms, we have been lucky so far but keeping an eye on the creeks and radar.

Link to WYMT-TV Radar
Link to a video i shot just after the kids go home from school.

As i am about to press Create Thread, it is calm here. 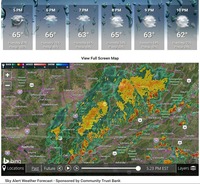