Letters of a Radio Engineer to his Son

This is interesting; “Letters of a Radio Engineer to his Son”
A book written in 1922, it’s in the public domain and you can download free in several formats: https://archive.org/details/lettersofradioen00millrich

I just downloaded the pdf a few minutes ago, not actually read it, but did find some more information about the book and author..

“..It was never printed again commercially, though modern public-domain trawlers do still reprint the book today. It’s not a legitimate father-son book. Instead its more of a radio hobbyist instructional written from that point of view. Nonetheless it’s rare as hell so we’re lucky to find even the digital copy…

John Mills worked in the Engineering Department of Western Electric and generated a large number of patents for Western Electric including some early two-way transmission technology. He was a member of the IEEE, and a long time radio man. How long?  He was on hand in 1915 in Arlington when the first Naval order was sent by Wireless. In his writings he  proves to be shockingly progressive, a man of science and not politics.

He designed the Bell Telephone exhibits at the world’s fairs in Chicago, San Diego, Dallas, San Francisco and New York. By about 1925 he was working as the Director of Publications at Bell Telephone Laboratories. He worked in that position for another 20 years before retiring. “ 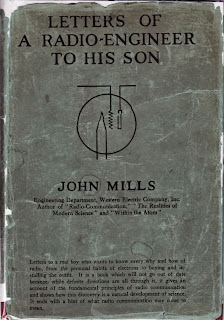