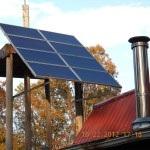 Active 1 year, 11 months ago
Hey! Haven’t been here for a while. Nice new look! View

..And Buy A Field Strength Meter?

Why is everyone so afraid of the FCC Boogie Mans? I mean, really..

Why is everyone so afraid of the FCC Boogie Mans? I mean, really..

I believe it would be obvious if I was runnin’ a whole lot more than 100 mW’s if I was. Even at 200 or 300 mW’s it would be very obvious to the boogie mans. I believe that they would know if you’re runnin’ more power than you’re suppost to.. Period! Even under great conditions, 100 mW’s is only gonna make so much field strength. If yer over the allowed level slightly, they’d know that ya snuck an extra ground wire or somethin’ in there somewhere. Perhaps an honest mistake? (But maybe ya knew.. LOL) If yer WAY over the limits, yer fried!

I don’t think that they’ll drag ya off into the fog, screamin’ and kickin’, never to be seen again! I don’t even think that they would bother ya unless there was a complaint! If that’s the case, just shut ‘er down! I imagine that some areas just ain’t Part-15 friendly, legal or not! You just gotta live with it! Ain’t no way yer gonna fight the big boys and win if they don’t want ya on the air! I know it suks but it’s real..

This certification thing is just a game! They pay someone to get a sticker on their product so you can break a law with it? What kinda crap is that? If it was truly “Compliant”, there wouldn’t be any way for anyone to modify things to break a law! So, there is no protection just because it has that fancy sticker on it! It’s obvious that anyone with any skills in the theory can break the law with a certified unit! So, what’s it worth? What does it matter how it was “tested” by the proper people to get the sticker? Who really cares! I just know that the boogie mans can shut me down and cause me a lot of grief if I mess with ‘um, regardless of what I’m runnin’, even with that fancy sticker!

I think that we just need to have fun and not sit around and chew on our nails wonderin’ if we’re gonna get busted or not. I know I ain’t goin’ to! I ain’t sellin’ my car to afford a field strength meter either! I’m gonna use good common sense and understand that there is a possibility that I “could” break the law if I get too fancy on my set-up and try to squeeze every inch of distance from my junk! I’m not tryin’ to cover a town! Let’s be real and understand the real potential of what we have to work with! It’s a hobby! You pump tunes to yer back yard and mebby a neighbor or two will hear the stuff ya put out there! That’s it! That’s all that it was intended for! I fully understand it can be a very indepth hobby with lots of theory involved but why push the limits!

Keep it fun for goodness sakes! If I’m tryin’ to be legal and someone complains, I guess I’ll just shut ‘er down. I’ll understand that from the start..